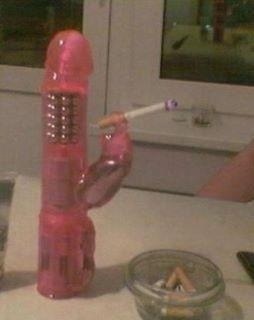 There's a cold, constant neon flicker
Filled with an odour of decline and sour liqour
Where bodies intertwine and spirits linger
I suck the blood of a left hand finger
And with it I release my self-esteem
A reason to redeem
I'm a failure - I'm unclean

There's not an action I regret
I light another cigarette

We inhale the honey gently
Planning a smooth and thoughtful re-entry
A first world war documentary
With a touch of the twenty-first century
Two calculative wannabes
Running dry on energy
With poison floating through their veins
Superficial intolerance
Four blurred eyes taken leave of sense
Intoxicated, in pains
Confronting, colliding, exploding
As if our lives would end this very day
With lethal words that sting and say
I've seen it all
I'll take anything, come what may
Given the world into my hands
There's something I wouldn't miss
The fruit of an evening like this
The reuniting kiss

Take aim, fire - this is what you get
We light another cigarette

Trackback specific URI for this entry

The author does not allow comments to this entry